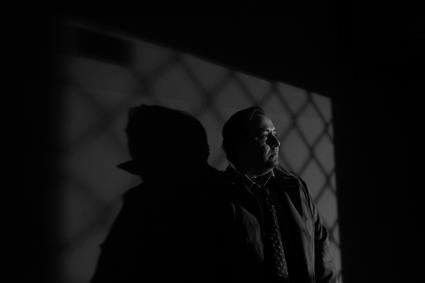 Paul D. Brazill is the author of Gumshoe and Guns Of Brixton. He was born in England and lives in Poland. He is an International Thriller Writers Inc member whose writing has been translated into Italian, Polish and Slovene. He has had writing published in various magazines and anthologies, including The Mammoth Books of Best British Crime 8 and 10, alongside the likes of Ian Rankin, Neil Gaiman and Lee Child. He has edited a few anthologies, including the best-selling True Brit Grit – with Luca Veste.

He can be found blogging here.

Blurb: When the simple task of collecting a briefcase from a Northern courier in his London lock-up results in a dead Geordie gangster there’s only one thing that Kenny Rogan can do…dress up in drag and rob a jewellers with ‘Big’ Jim and hope everything turns out okay!

From the pen of Paul D Brazill comes a whole host of larger-than-life characters, a sharp plot and the kind of humour you wouldn’t let your granny read.

An excerpt from Guns of Brixton:

Lynne wiped the cocaine from her nose and looked up as a shining black Jaguar pulled up outside the shop.

‘No bleedin’ way! Customer’s at this time of the morning? I can’t believe it.’ said Lynne, quickly putting on an extra layer of make-up. ‘It’s bleeding’ New Year’s Day. We’re supposed to be shut.’

‘Now, you know that Mrs Clarkeson says that we have a no closing policy, Lynne. Tight twat, that she is,’ said George.

‘Well, they’ll have to wait until we’ve finished the stock taking,’ said Lynne.

The car doors slammed and two tall, glittery blonds got out, wearing more gold than you’d find in Fort Knox or on Jimmy Saville.

‘I thought you hated the Russians?’ said Lynne.

‘The men! The bullet heads with no necks. I’m not into rough. But the women usually take a shine to me,’ said George. ‘One of them once said that I looked like Hugh Grant.’ He straightened his tie in the mirror.

‘And, more to the point, Russians usually spend a fortune and I really need the dosh this month. I’m off to Barcelona next weekend and I work on commission, remember. We’ve got to let them in.’

Lynne just shrugged and finished off the cocaine.

Lynne made a gagging sound.

‘Metaphorically speaking, of course,’ said George. He wiped the white powder from his nose, pressed the button to open the security door and painted on a smile as wide as the Grand Canyon. He marched toward the door as Lynne tidied up.

‘Morning ladies,’ he beamed. Then he saw the Glock and his jaw dropped so much you could have scraped carpet fluff from his bottom lip.

Get your copy of Guns of Brixton from the following places: Amazon, Amazon UK.

His other books include 13 Shots of Noir, Snapshots, and Roman Dalton - Werewolf PI.

This entry was posted on August 10, 2013 at 10:49 pm and is filed under Author Promotions, Authors, Feature, Fiction. You can follow any responses to this entry through the RSS 2.0 feed.